Simonetta Di Pippo is the Director of the United Nations Office for Outer Space Affairs (UNOOSA), which is mandated to enhance international cooperation in space activities to promote their use for humanity. Prior to joining UNOOSA in 2014, she was Head of the European Space Policy Observatory at Agenzia Spaziale Italiana (ASI) in Brussels. Ms. Di Pippo also served as Director of Human Spaceflight of the European Space Agency from 2008 to 2011, and Director of the Observation of the Universe at ASI from 2002 to 2008, where she started her career in 1986. She has been an Academician of the International Academy of Astronautics (IAA) since 2013, and since 2016 a member of the IAA Board of Trustees.  Ms. Di Pippo is also a member of the World Economic Forum Global Future Council on space technology for 2016-18.

Ms Di Pippo holds a Master's Degree in Astrophysics and Space Physics from University "La Sapienza" in Rome, an Honoris Causa Degree in Environmental Studies from St. John University, and an Honoris Causa Degree in International Relations from John Cabot University. Ms. Di Pippo was knighted by the President of the Italian Republic in 2006. In 2008, the International Astronomical Union named asteroid 21887 "Dipippo" in honour of her contribution to space activities. 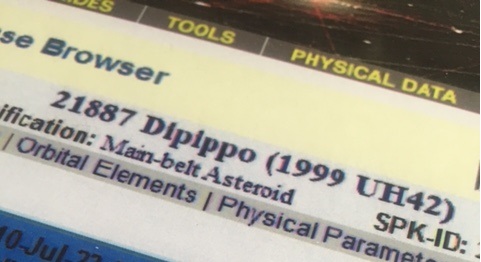 In 2008, the International Astronomical Union assigned the name "dipippo" to asteroid 21887, in recognition of her effort in space exploration.