What is this series about?

Space debris is an issue of global concern that threatens our continued use of near-Earth space for the benefit of humankind. To raise awareness about this growing problem, ESA and the United Nations Office for Outer Space Affairs (UNOOSA) have created a series of nine infographics and podcasts that tell the story of space debris, explain the risks and illustrate the solutions available to ensure future space exploration remains sustainable. Scroll down to see the infographics and listen to the podcasts.

Space may seem vast, but the orbits around Earth in which satellites reside are a limited natural resource. Accidental collisions, explosions and even the intentional destruction of satellites have created millions of debris fragments, which, orbiting at high speed, can damage or destroy any functioning spacecraft that crosses their path.

As satellite technology becomes ever more relied upon, it gets increasingly important to protect these unique orbital regions that are essential for humanity to, for example, gather data for weather forecasting and to better understand extreme weather and our changing climate, as well as for internet access, communication and location services.

A concern to all nations

Unfortunately, the amount of space debris in orbit is increasing at an exponential rate. As a growing number of countries and actors begin space activities - a hugely positive development in general - and as satellite operations become more complex and the number of objects being launched, including in large constellations, rapidly increases, so too do the challenges posed to our space environment.

In 2019, ESA's Space Safety programme was adopted as a key pillar in the Agency's activities. The programme, an expansion of the former Space Situational Awareness programme, includes ESA's Space Debris and Clean Space Offices, which are working to better understand the debris environment, prevent the creation of more debris, reduce the amount in orbit and lessen the impact of space activities on Earth.

In 2018, the United Nations General Assembly expressed its worry about the fragility of the space environment and the impact of space debris, which is an issue of concern to all nations. In 2019, the United Nations Committee on the Peaceful Uses of Outer Space (COPUOS), of which UNOOSA is Secretariat, adopted the Guidelines for the Long-Term Sustainability of Outer Space Activities (LTS Guidelines), which provide guidance to help ensure the safe and sustainable use of space. The LTS Guidelines were subsequently welcomed with appreciation by the United Nations General Assembly, and a new working group will continue multilateral discussions on the topic.

This new series of infographics jointly produced by UNOOSA and ESA include attractive, easy to understand illustrations, facts and figures so that everyone, with or without any previous knowledge of spaceflight, can understand space debris and the challenge it poses. They cover topics such as how debris is created, how to avoid collisions, the risk to humans in space from debris and on Earth from re-entries, as well as technologies for safe debris mitigation and removal.

Each of the nine infographics is accompanied by a podcast with audio commentary from UNOOSA and ESA experts, who help navigate and understand the material.

Infographics and podcasts will be released here, once a week, over a period of nine weeks, starting on 10 February 2021, as well as via @UNOOSA and @ESA social media accounts.

"A new era of space has begun, in which large constellations of thousands of satellites are being launched to the skies," said ESA Director Jan Wörner. "What this 'New Space' makes possible - global internet access, telecommunications - it also threatens, as a rapid increase in space traffic may dramatically increase the chance of collisions. Innovative technologies, responsible behaviour and importantly international cooperation are fundamental to ensuring our future in space is sustainable." 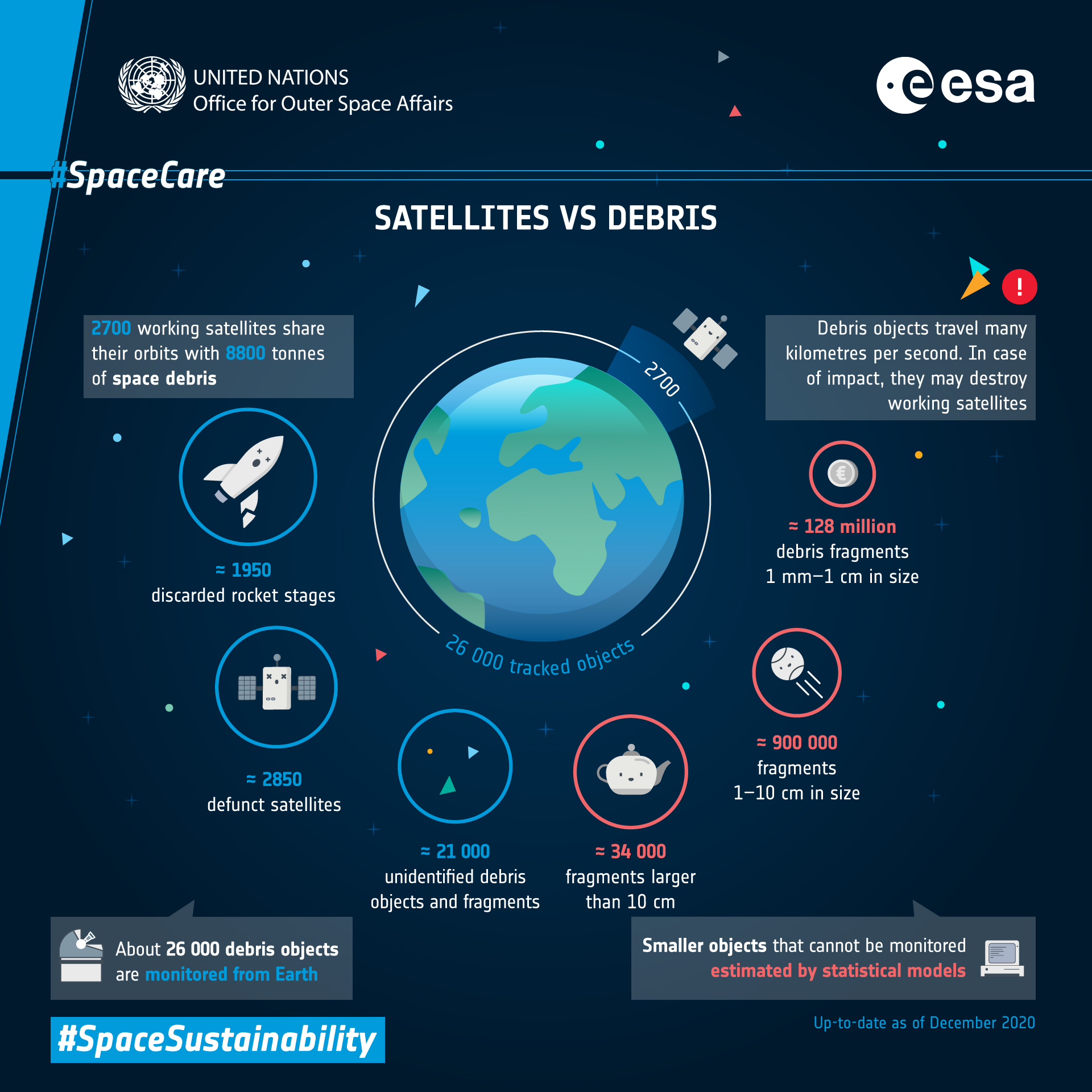 Space debris is a topic of global concern. While space has brought huge benefits to individuals and societies across the globe, the rapid increase of launched objects and increased traffic in our space highways means we are creating ever-more debris and threatening the very technologies we have come to rely on. Acknowledging the significance of this problem, UNOOSA and ESA have come together to raise awareness with a series of nine infographics that tell the space debris story so far and illustrate some of the solutions available for us to achieve a sustainable use of space.

Satellites in orbit share near-Earth space with millions of fast-moving and dangerous debris objects. From tiny fragments millimetres in size to entire satellites no longer working, no longer controlled, roaming the space highways, each debris piece travels many kilometres per second. Any impact with one of these objects threatens to at least impair the functioning of a working spacecraft, or at worst destroy it altogether, creating ever more debris. In this infographic from ESA and the UN, find out about the scale of the debris problem: how much of it is up there, what scales are we talking about, and what are our satellites are up against? Find out more in Episode one of the corresponding ESA & UN podcast below, "Satellites vs. debris".

Listen to the podcast here:  https://soundcloud.com/esa/satellites-vs-debris 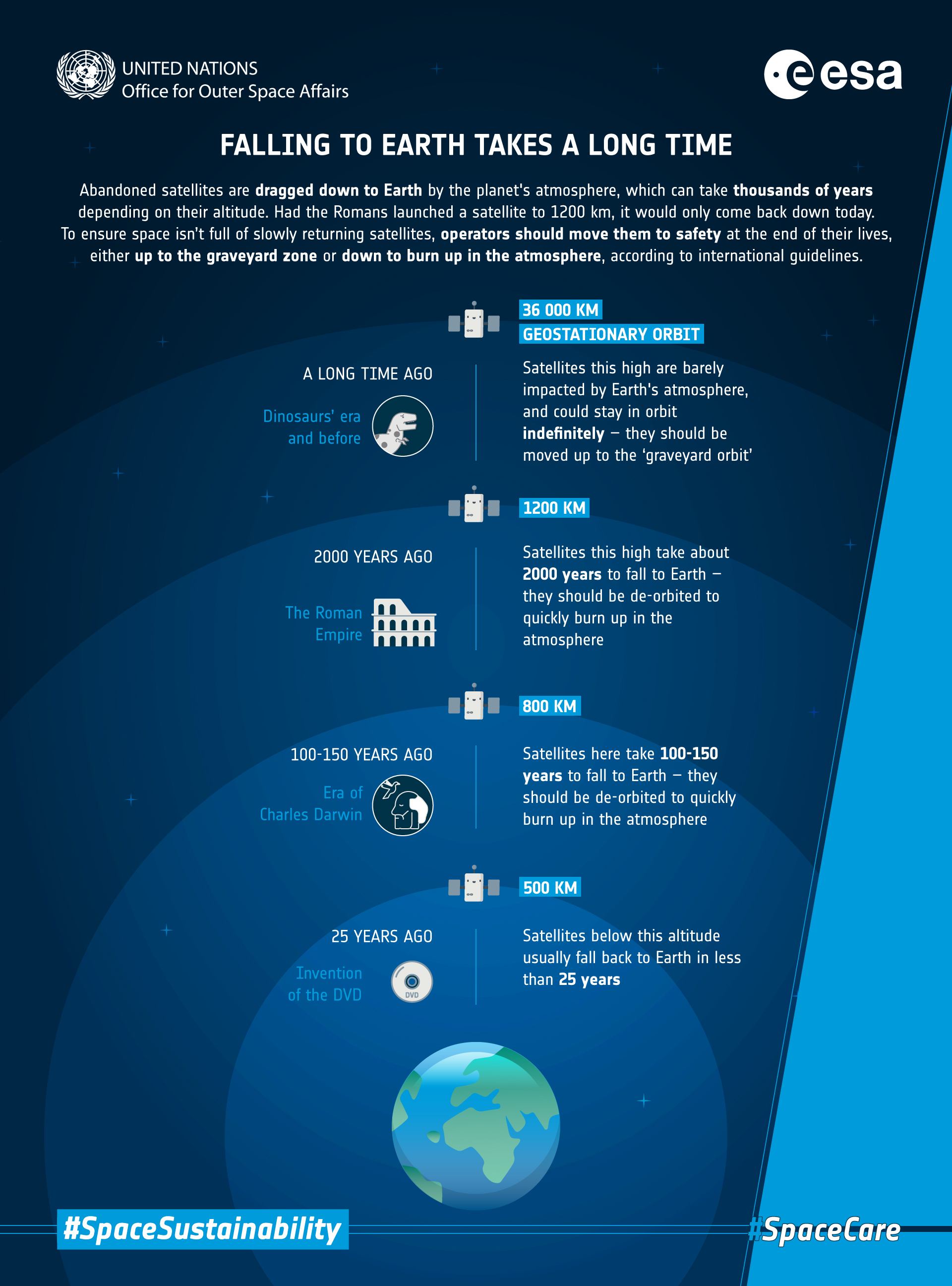 Our planet's atmosphere reduces the energy of satellites in orbit (on Earth, this would be like reducing their speed, but in space, it's complex!). This gradually then brings them back down to Earth. This process can be relatively fast for satellites flying at lower altitudes, taking less than 25 years, but for satellites launched into orbits tens of thousands of km away, it can be thousands of years before they return, if the atmosphere is even able to impact them at all. Had the dinosaurs launched a satellite into the furthest geostationary orbit, it would still be up there today. This means that as we launch satellites to space we must consider how they will be removed at the end of their lives, or else the skies will be filled with old, defunct spacecraft at risk of collision, explosion, and the near-certain creation of vast amounts of space debris. In this infographic from ESA and the UN, find out how long it would take satellites at different altitudes to naturally fall back to Earth, and what must be done responsibly dispose of them at the end of their lives. Find out more in Episode two of the corresponding ESA & UN podcast below, "Falling to Earth takes a long time".
Listen to the podcast here:   https://soundcloud.com/esa/falling-to-earth-takes-a-long-time
Infographic n.3 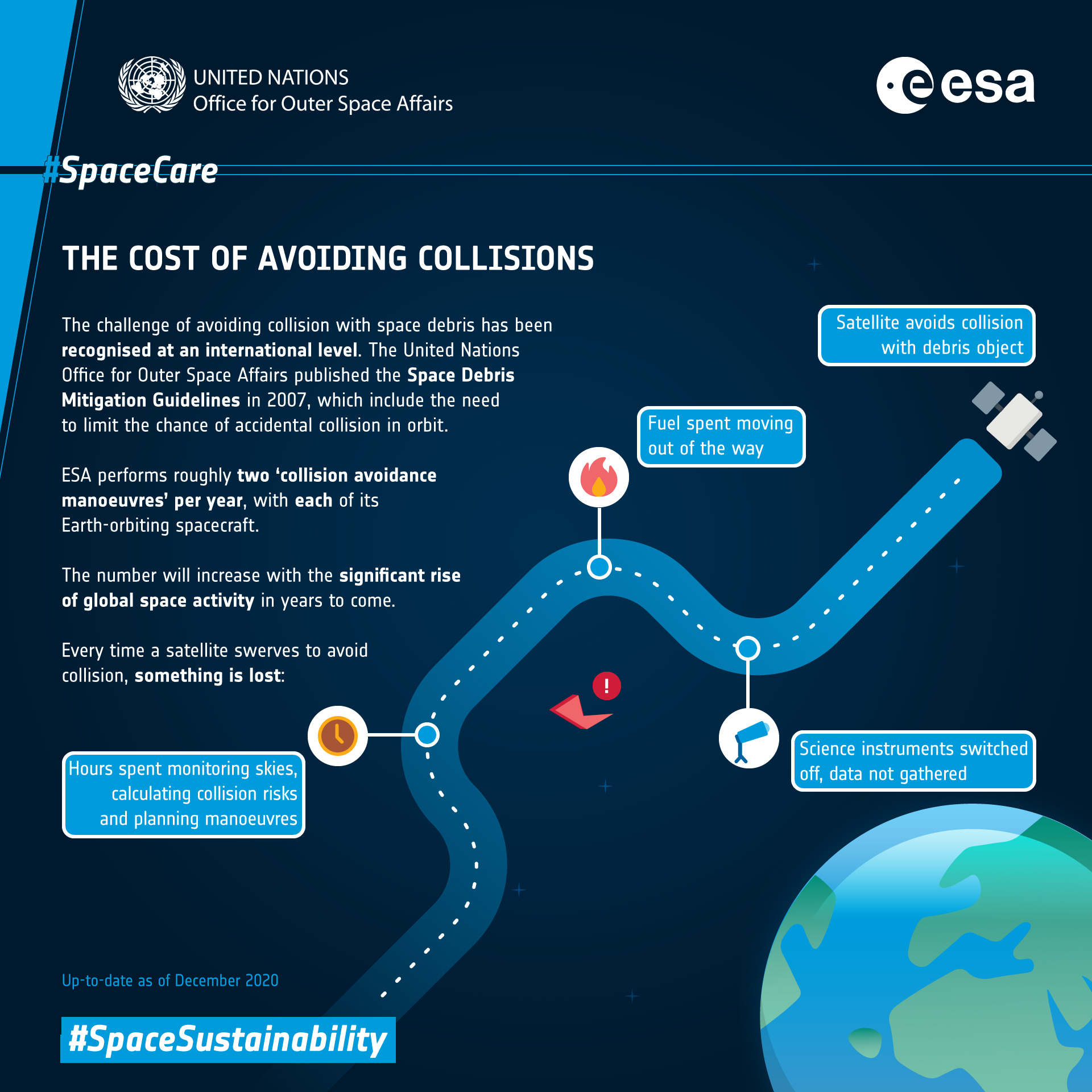 Space might seem an empty, vast expanse, but satellites in Earth's orbit face the constant risk of collision - with other satellites, dead or alive, or with fragments of debris. It is now routine for operators of spacecraft in busy highways to divert their mission out of harms way. In fact at ESA, each mission flown performs on average two 'collision avoidance manoeuvres' per year. These manoeuvres are costly. Hours are spent on the ground monitoring the skies, calculating the risk and planning manoeuvres, not to mention the extra fuel spent and missed science and data collected while instruments are turned off. Find out more in the podcast below.
Listen to the podcast here:  https://soundcloud.com/esa/avoiding-collision
Infographic n.4 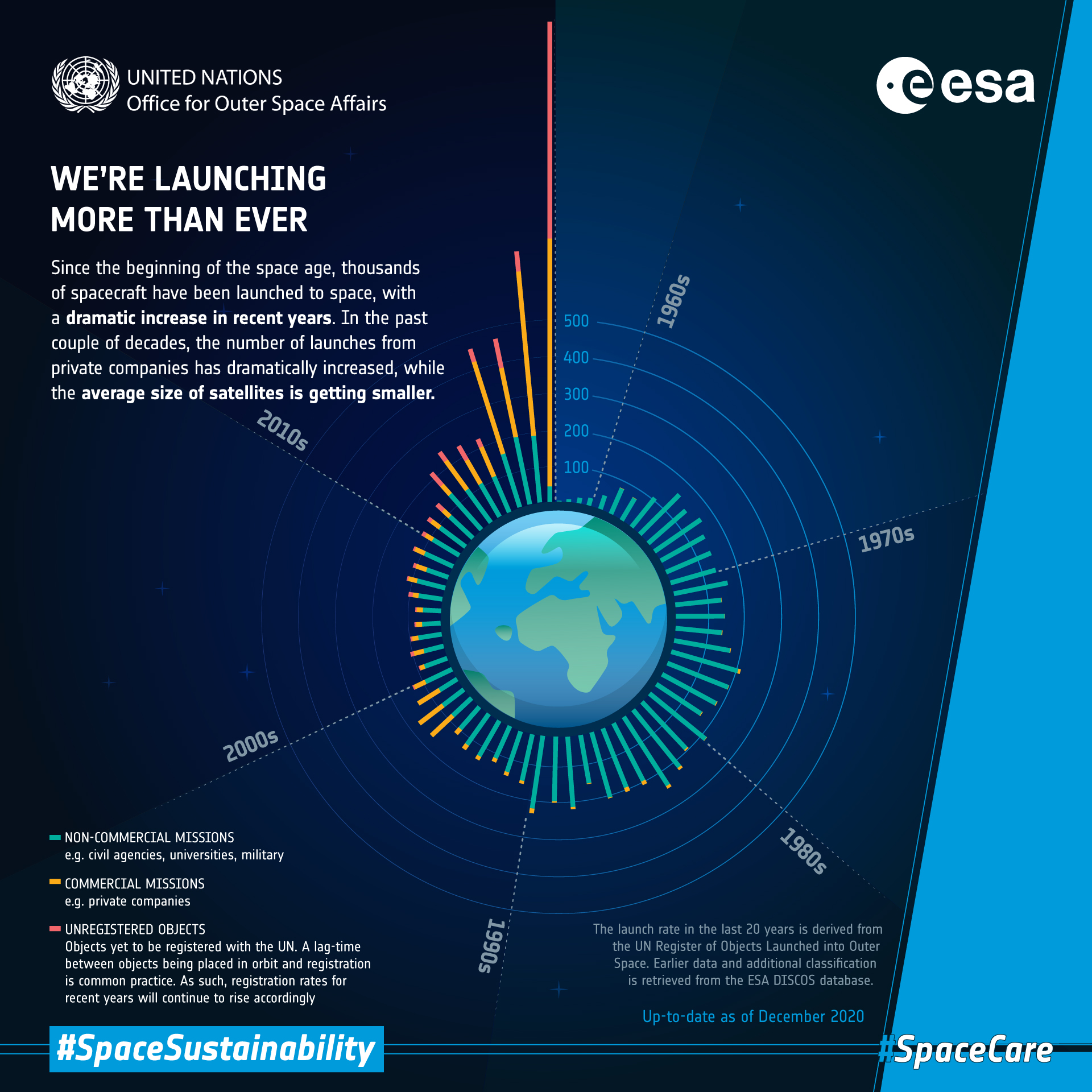 Since the beginning of the space age, with the launch of Sputnik in 1958, we have launched thousands of rockets carrying more than ten thousand satellites into space. The last few years have seen a dramatic increase in these numbers, and over the last few decades there has been a change in the type of mission flown, with private companies (yellow) launching smaller satellites than those launched by non-commercial agencies (blue). This graph, created in a joint project between ESA and the UN, also shows the number of unregistered objects (red) has increased in recent years. It should be noted that these are objects not yet registered with the UN, and are expected to rise. Find out more about why this matters in the joint ESA-UN podcast that narrates this space debris infographic series.
Listen to the podcast here:  https://soundcloud.com/esa/launching-more
Copyright ©2021 UNOOSA, All Rights Reserved