Despite the weather outside, a team from Warsaw University of Technology in Poland was full of energy as they prepared their drop experiments at the Bremen Drop Tower.

The objective of the Warsaw University of Technology's drop experiment was to verify, in vacuum and microgravity conditions, the deployment of the deorbit sail system on their two unit CubeSat called "PW-Sat2". The deorbit sail is a type of passive deorbit device based on the drag augmenting phenomenon, and its main purpose is to prevent satellites becoming orbital debris after completing their missions.


Here is an artist's image of PW-Sat2 with its fully deployed deorbit sail in outer space.The deorbit sail of PW-Sat2 is a square measuring 4m   2 and made of durable foil. The sail will be coiled around a cylinder, which is 80mm in diameter and less than 70mm tall. After burning a Dyneema string, the sail will be unlocked and deployed within a safe distance from the CubeSat. The biggest advantage of the design is that the releasing system does not require any engines or continuous energy supply.

Upon the deployment of the sail, the Warsaw University of Technology team expects the total area and aerodynamic drag of the CubeSat to be significantly increased, and that the sail will accelerate for deorbiting. According to the team, the sail will shorten the orbit lifetime of the CubeSat from over 20 years to 6-12 months. If the design of the sail is successful, it is expected that this will contribute to reducing the size as well as the cost of CubeSats in the future.

This is how the sail is coiled before its deployment!

After their initial selection, the team developed an Experiment Progress Report in mid May 2017, with the assistance of advisors at ZARM's Drop Tower. After submission of the report, the team and ZARM advisors prepared detailed plans via email and teleconferences for the Drop Tower experiment in November 2017.

The Drop Tower Experiment Series took place over the course of two weeks, with one week for integration, and the second week for conducting the four drops. The installation of the required equipment into the deceleration chamber of the Drop Tower was smoothly carried out by the team with help of ZARM advisors. Instead of using whole tower, they decided that a drop of only 8 metres was sufficient to test the sail, as the sail deploys very rapidly.

Mounting the 8 meter measurement sheet in the deceleration chamber. Four cameras were also carefully mounted in order to precisely analyse the drop from various angles.

The chamber is now going to become vacuum. 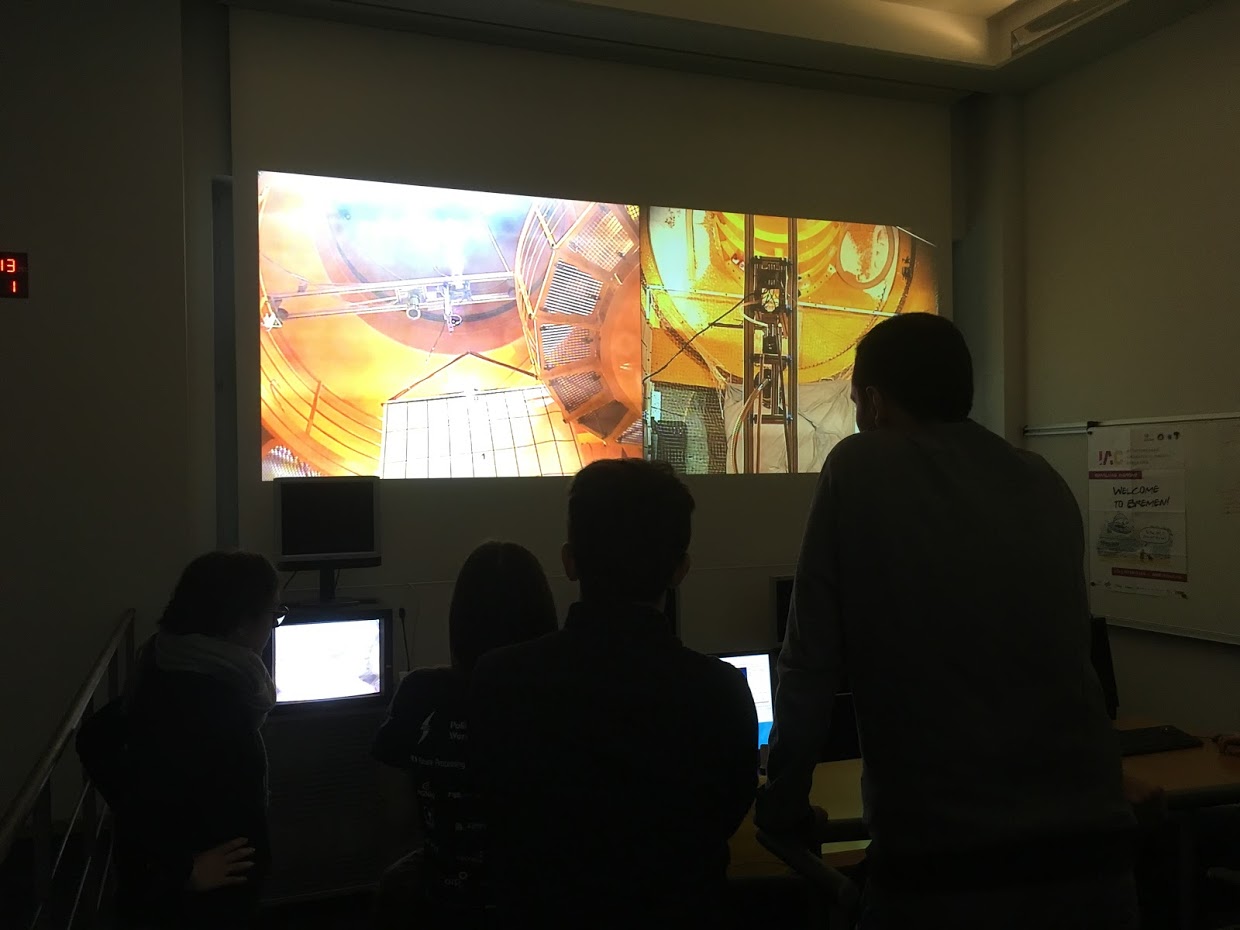 The team breathlessly watched the experiment through the chamber's monitor cameras. 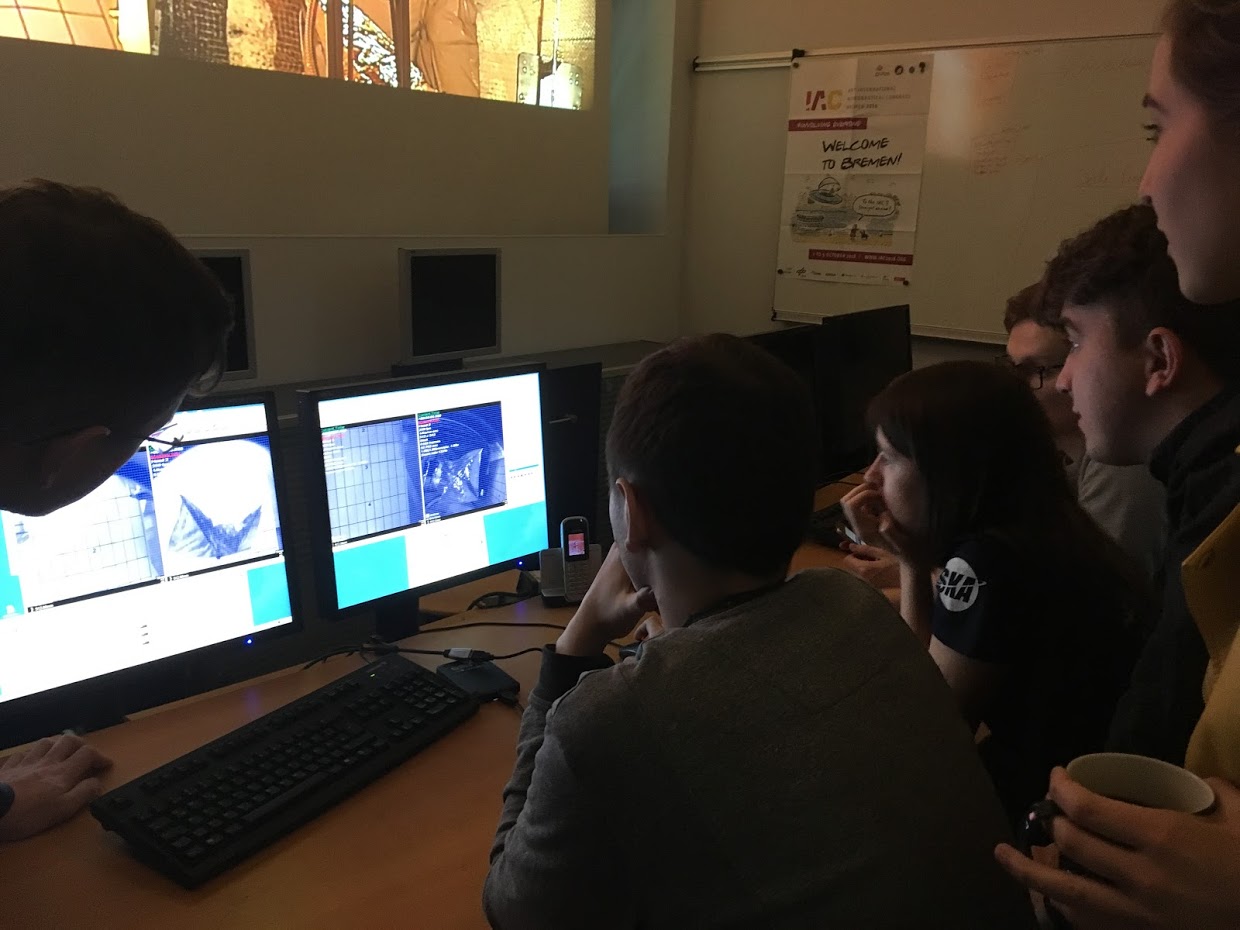 They promptly started to analyze the recorded deployment of the sail. 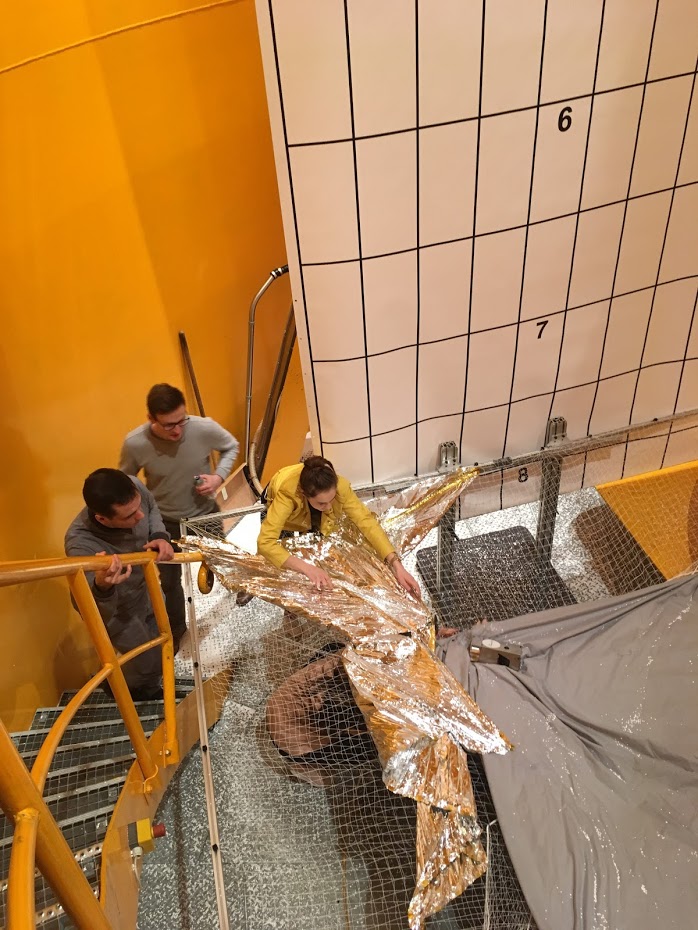 After each drop, they corrected the satellite. 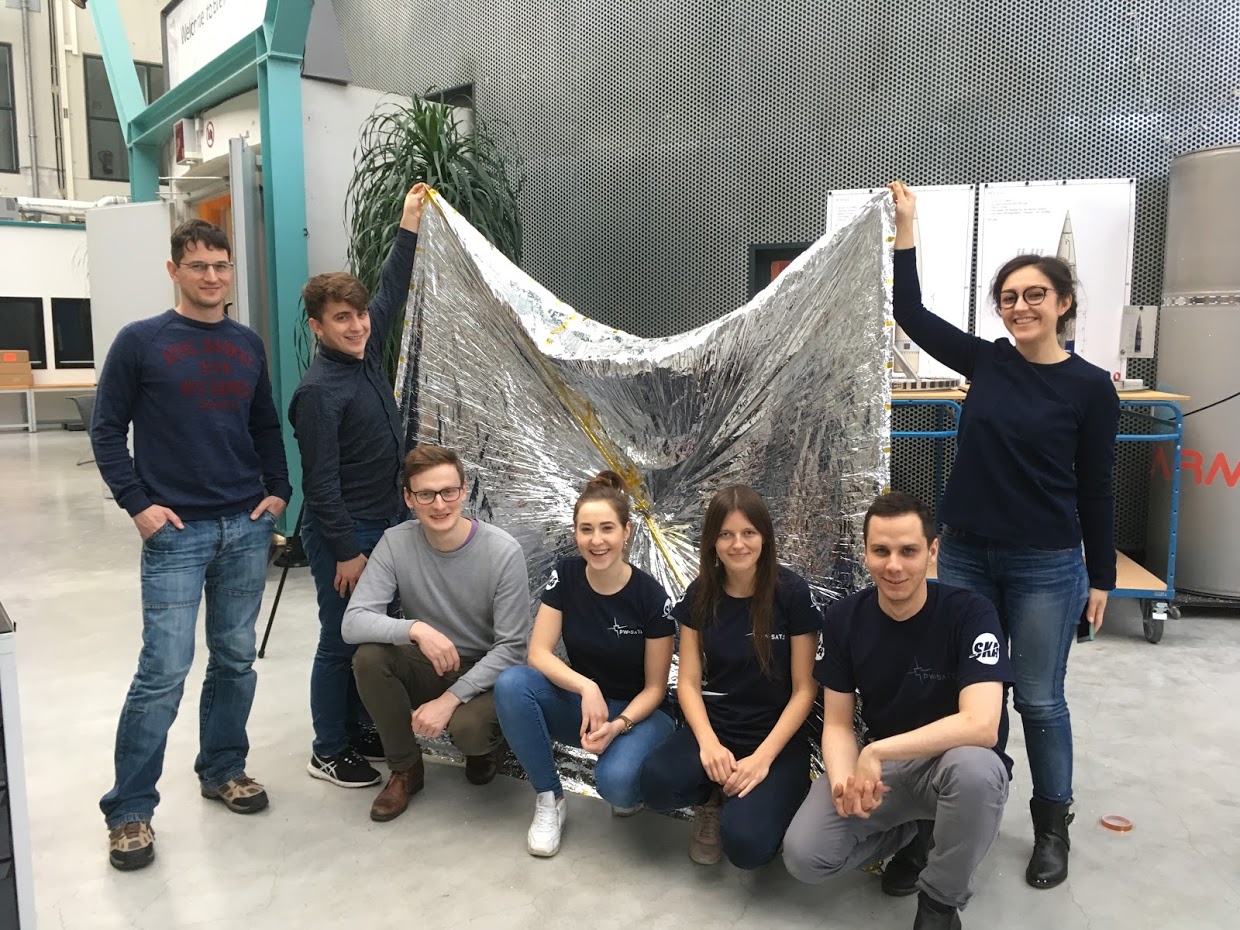 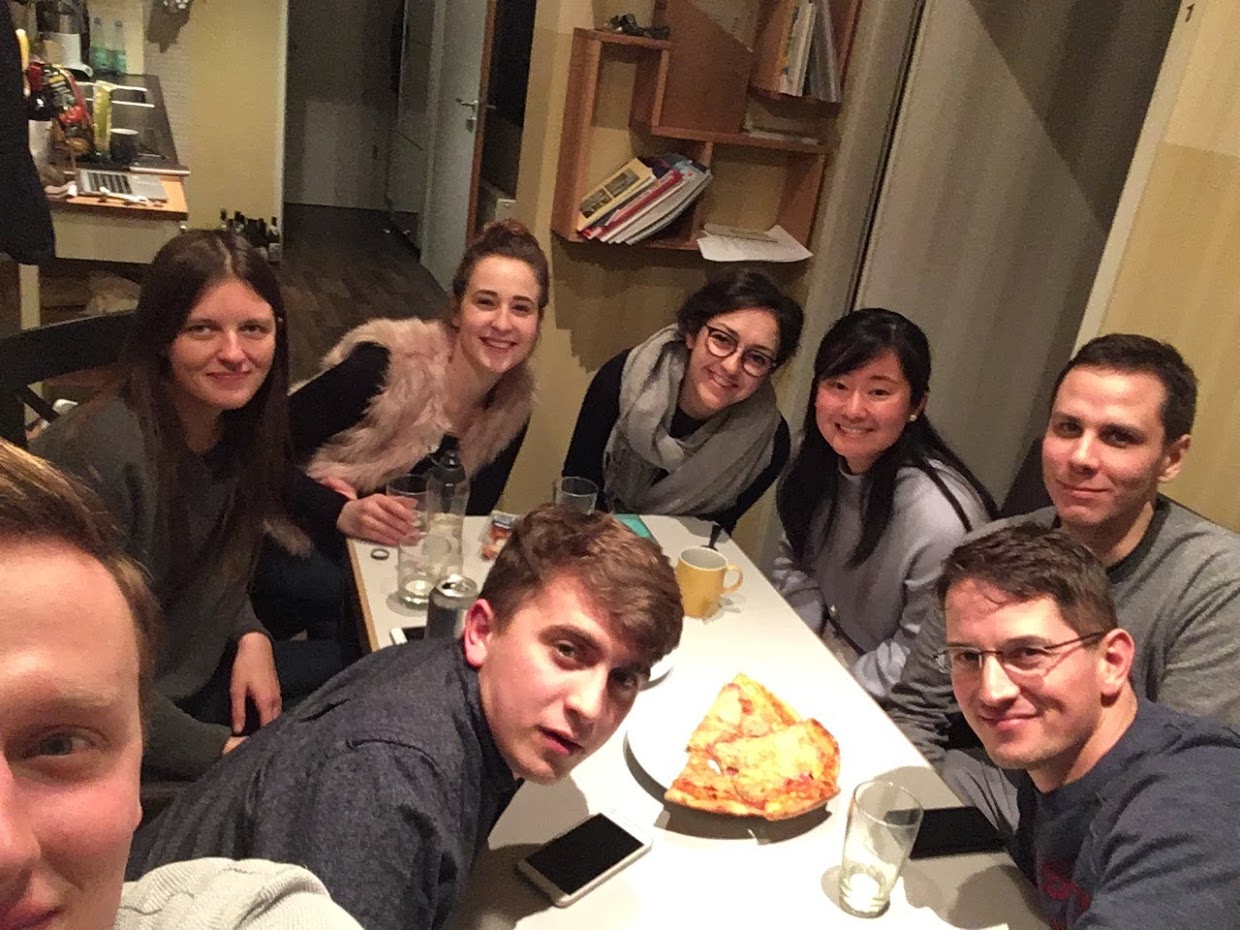 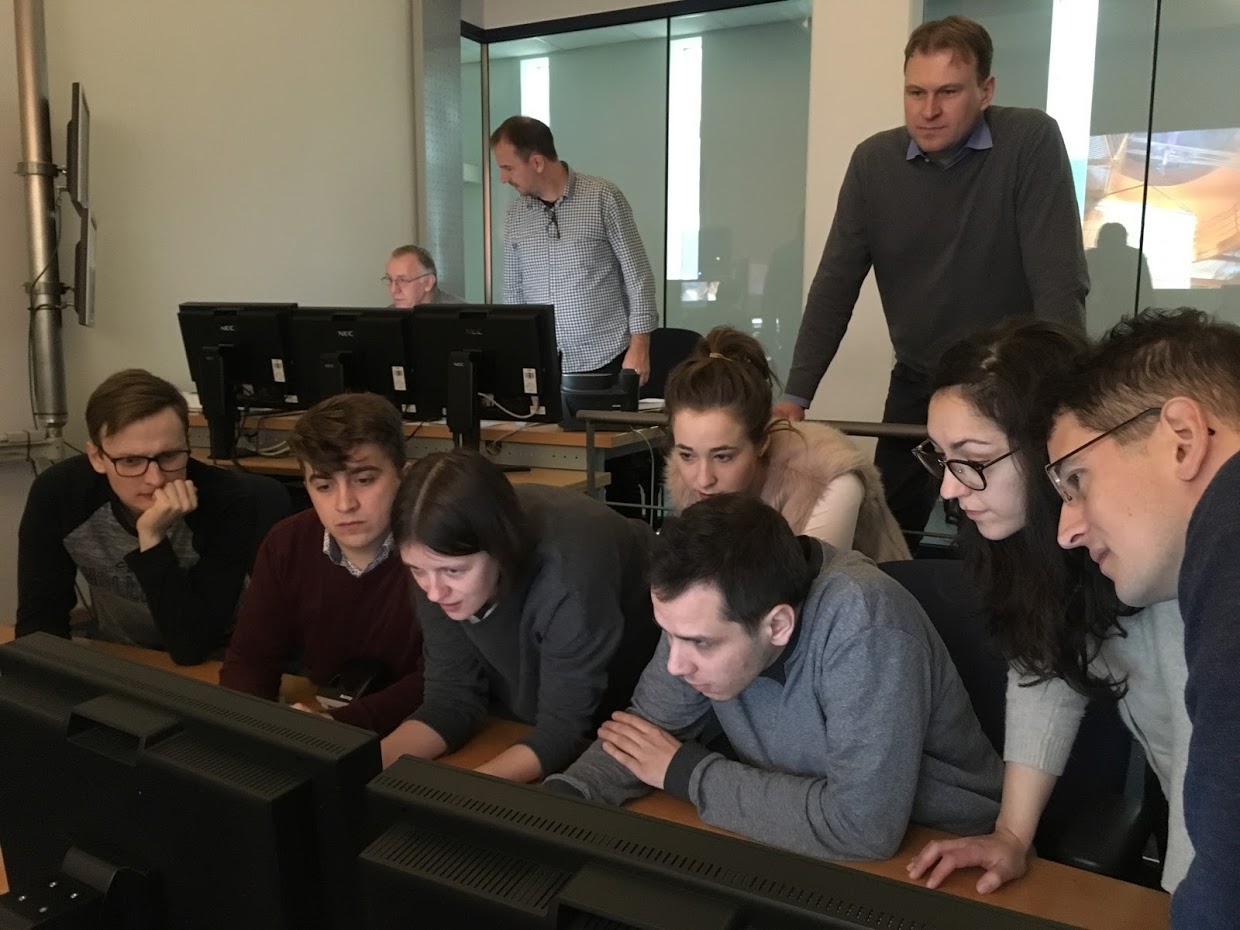 Serious and nervous moments when checking the data after the drops. 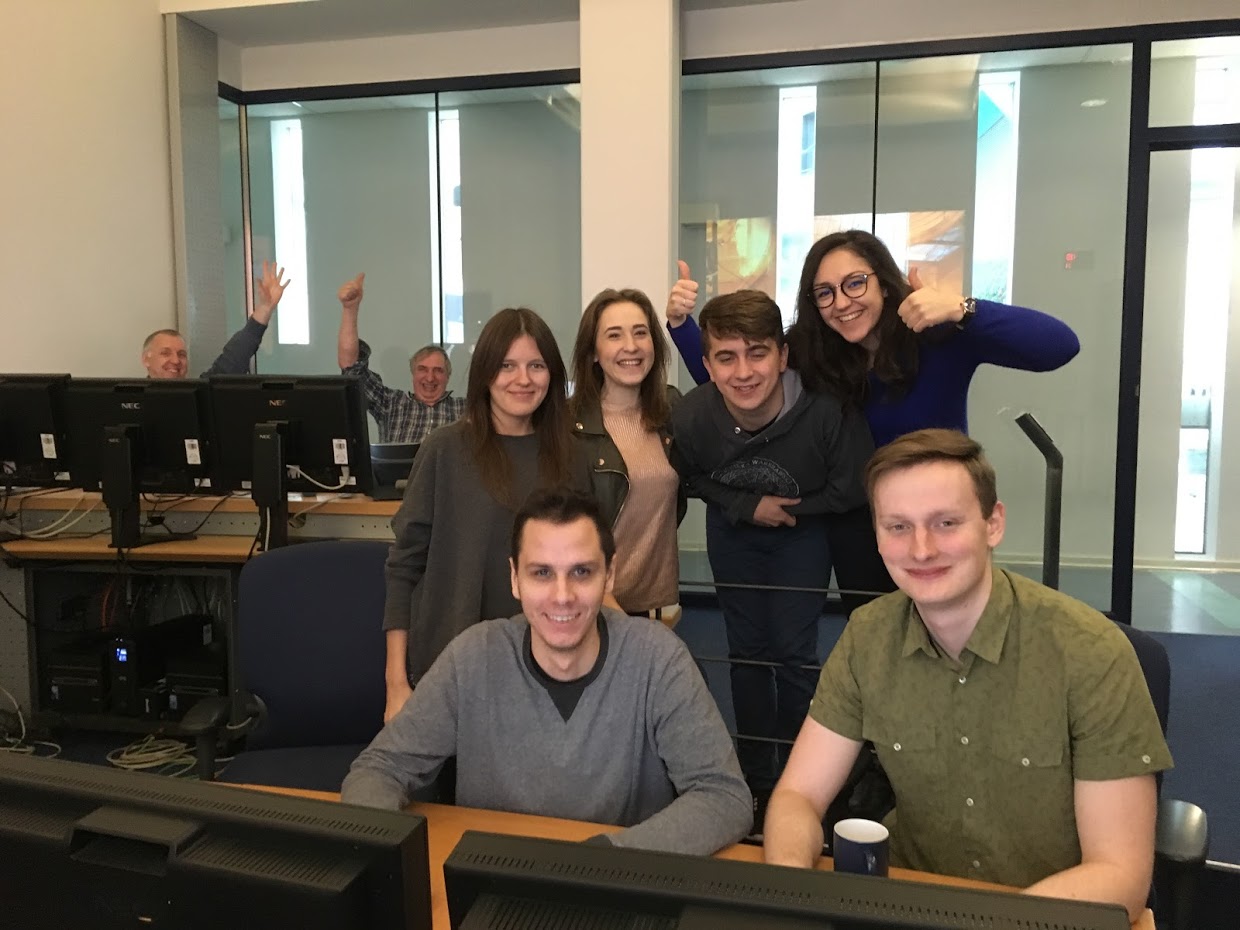 On the last day, celebrating the last successful drop with the team and the ZARM engineers. 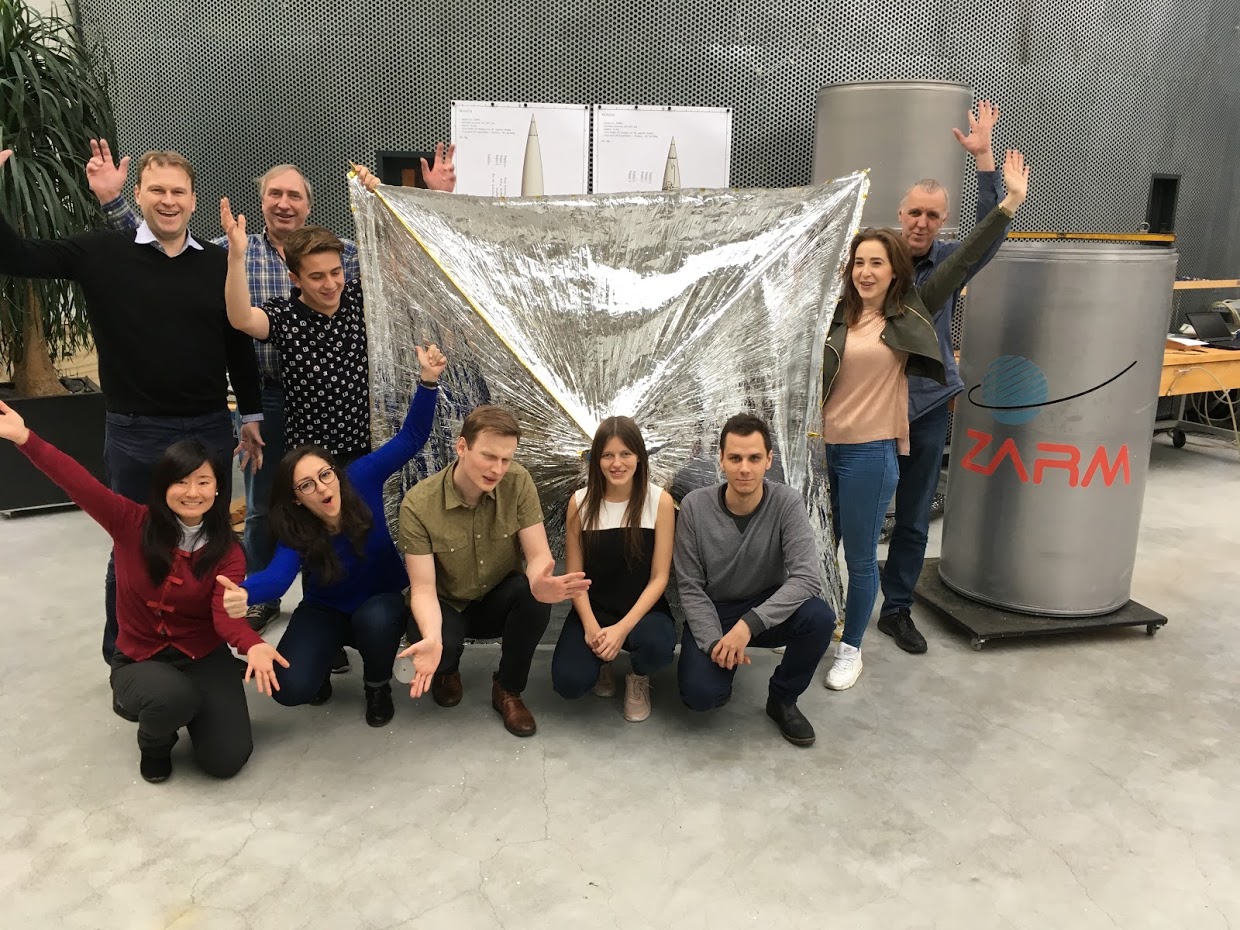 All 4 drops were successful. Congratulations to the team. You can read their final report from HERE.