In the second cycle of DropTES in 2015, a student team from Universidad Católica Boliviana "San Pablo" was awarded the fellowship. The objective was to examine and evaluate the property of an alloy of Nickel and Titanium "Nitinol" under the microgravity environment. Nitinol has a shape memory which allows it to return to the original form by heating after deformed.  The team had an ambitious goal to apply this alloy to future space applications in order to reduce the complexity of design and lower the costs. The team would also like to examine the possibility to use Nitinol in the medical field.

The student team initiated their preparation work in Bolivia in May. They started designing the experimental instruments by resolving any technical issues. The experiment at the Bremen Drop Tower took place from 17 to 27 November 2015.

As a result of these experiments, the team submitted two articles: Report on mechanical features analysis of the Nitinol under microgravity conditions and Report on cardiovascular medical devices performance under microgravity conditions. The team presented both articles and the investigation in one contest of innovation called "Innova Bolivia 6.0", in which the team won the first prize in the University category. The team is furthering the theme as well as disseminating the results in scientific conferences and symposia. 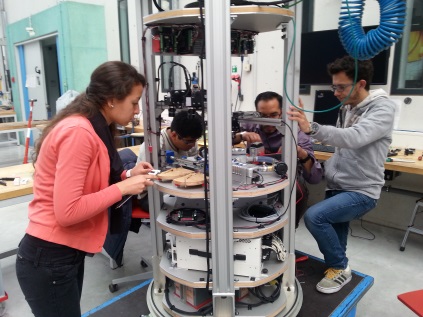