"With its promise of ground-breaking discoveries, exploration has always been one of the defining trait of mankind. As space missions gained momentum and became more frequent thanks to technological advancement, previously unknown challenges such as microbial infections on board space vehicles came into light"- said Ágota, the leader student of the team.

"Human habitation in confined space is accompanied by microbes. Due to continuously increasing drug resistance of pathogenic infections, both on Earth and in outer space, we need new treatment solutions for long-lasting space missions in the future."

"The solution proposed for the DropTES 2018 project consists in utilising multifunctional medicines and an unconventional method to make them acquire antimicrobial properties by exposure to ultraviolet laser radiations."

The DropTES 2018 team was composed by three PhD fellows and one MSc student from two renowned Romanian universities, the University of Bucharest and Politehnica University of Bucharest. The project involved young scientists from the National Institute for Laser, Plasma and Radiation Physics  currently working at the Laser Department and  Center for Advanced Laser Technologies (CETAL) at the Politehnica University.

The project was led and coordinated by Professor Mihail-Lucian Pascu, with Ms. Ágota Simon as biophysicist, Ms. Ioana-Simona Stroescu as biochemist and both Mr. Bogdan-Ștefăniță Călin and Mr. Dumitru-Cristian Trancă as engineers. The multidisciplinary background of the team was an asset for the success of the project, which may lead to innovative results in the use of micro- and optofluidics in space science.

The project proposed a novel idea to expose medicine droplets containing aqueous chlorpromazine (CPZ) solution to both laser radiation and microgravity conditions. According to their theory, in terrestrial conditions, medicines irradiated by UV laser beams lead to the transformation of the parent compound into new and more efficient photoproducts with increased antimicrobial activity compared to the unirradiated medicines.

The first week of the DropTES 2018 campaign consisted in assembling and testing on-site with the contribution of ZARM experts (Mr. Fred Oetken and Mr. Jan Siemer) as shown in the pictures below. 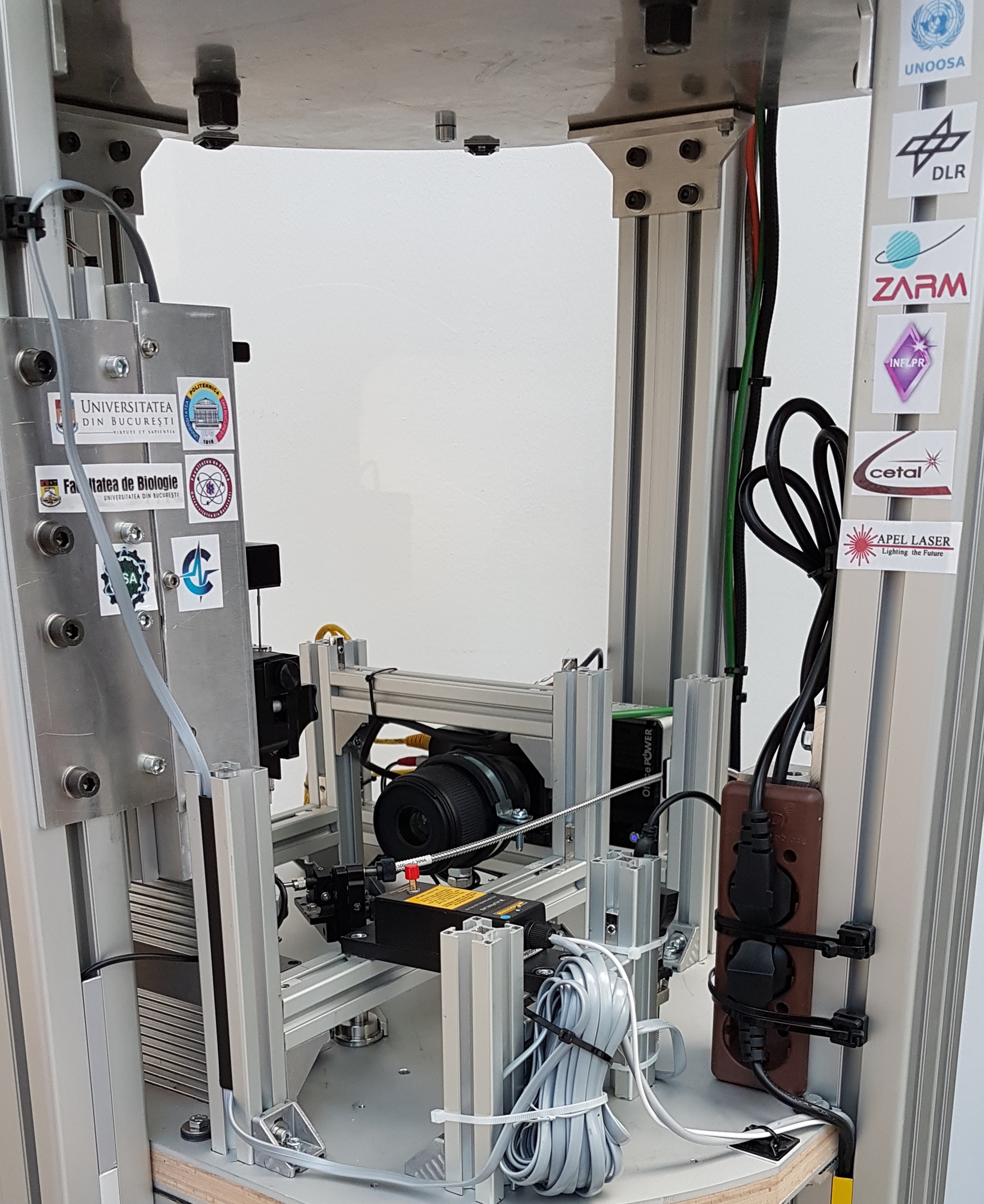 The experiment was divided in two parts.

The first part consisted in exposing one of the medicine droplets to laser radiation during microgravity conditions, while keeping both an unirradiated medicine and a water droplet as references. The real time laser induced fluorescence spectra was acquired by a spectrometer included in the system.

During the second part of the experiment, all three droplets were brought into contact and detached onto an aluminium target surface, under microgravity, to observe the interaction between the drops and the surface. The processes was recorded by a high-speed camera.

Within the first drop session, the team encountered some challenging issues. Because CPZ has low surface tension, the droplets containing this medicine presented a tendency to climb up on the needle, preventing the team from getting two droplets on the target surface.

After the first drop experiment, the team came up with the following solutions:

-          Applying a special Teflon coating on the needles to prevent the medicine solutions from climbing up;

Time for the second drop experiment..

During which the team successfully got all droplets in contact with the surface.

After applying the solutions, the rest of the drops all went well. 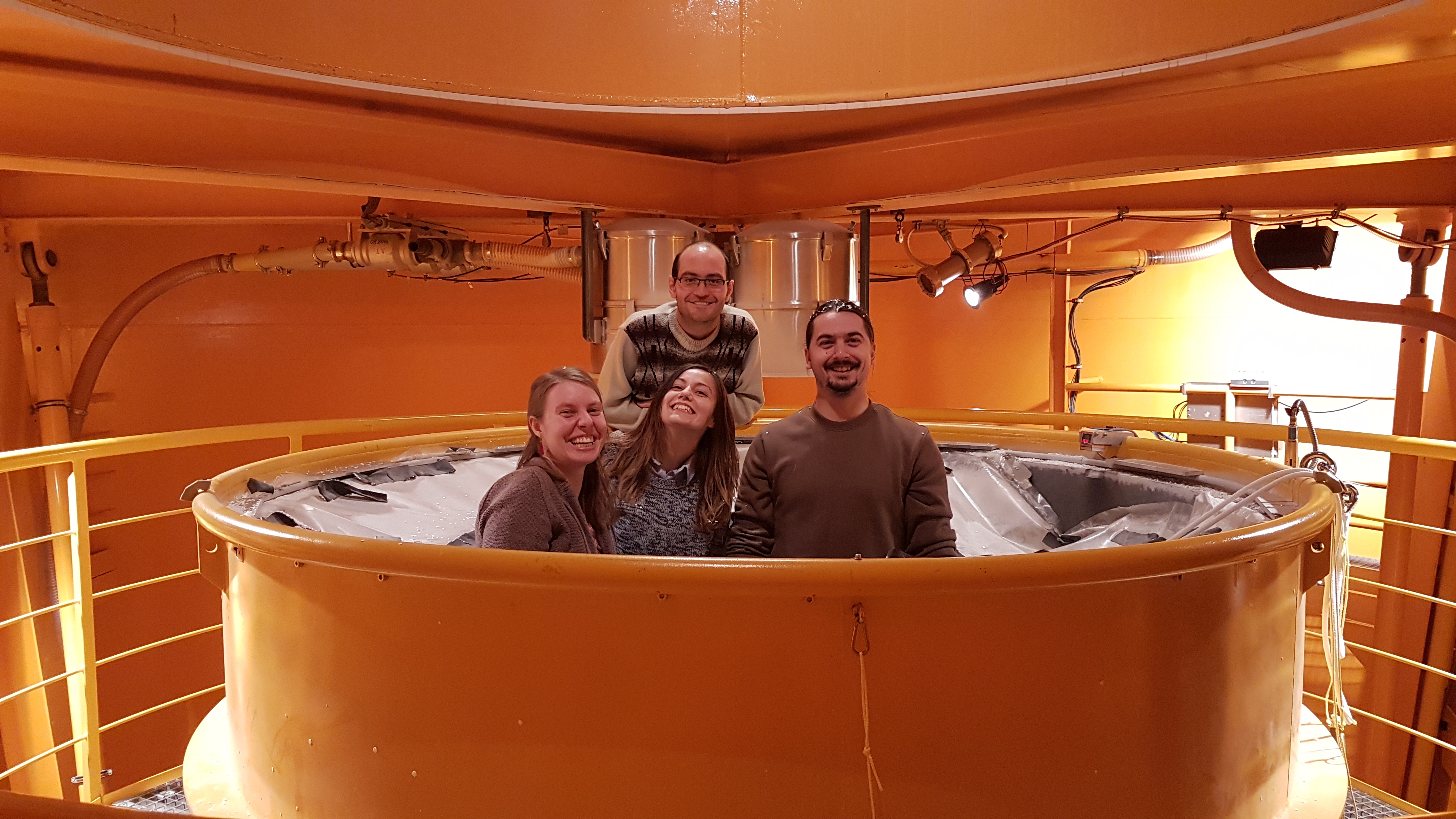 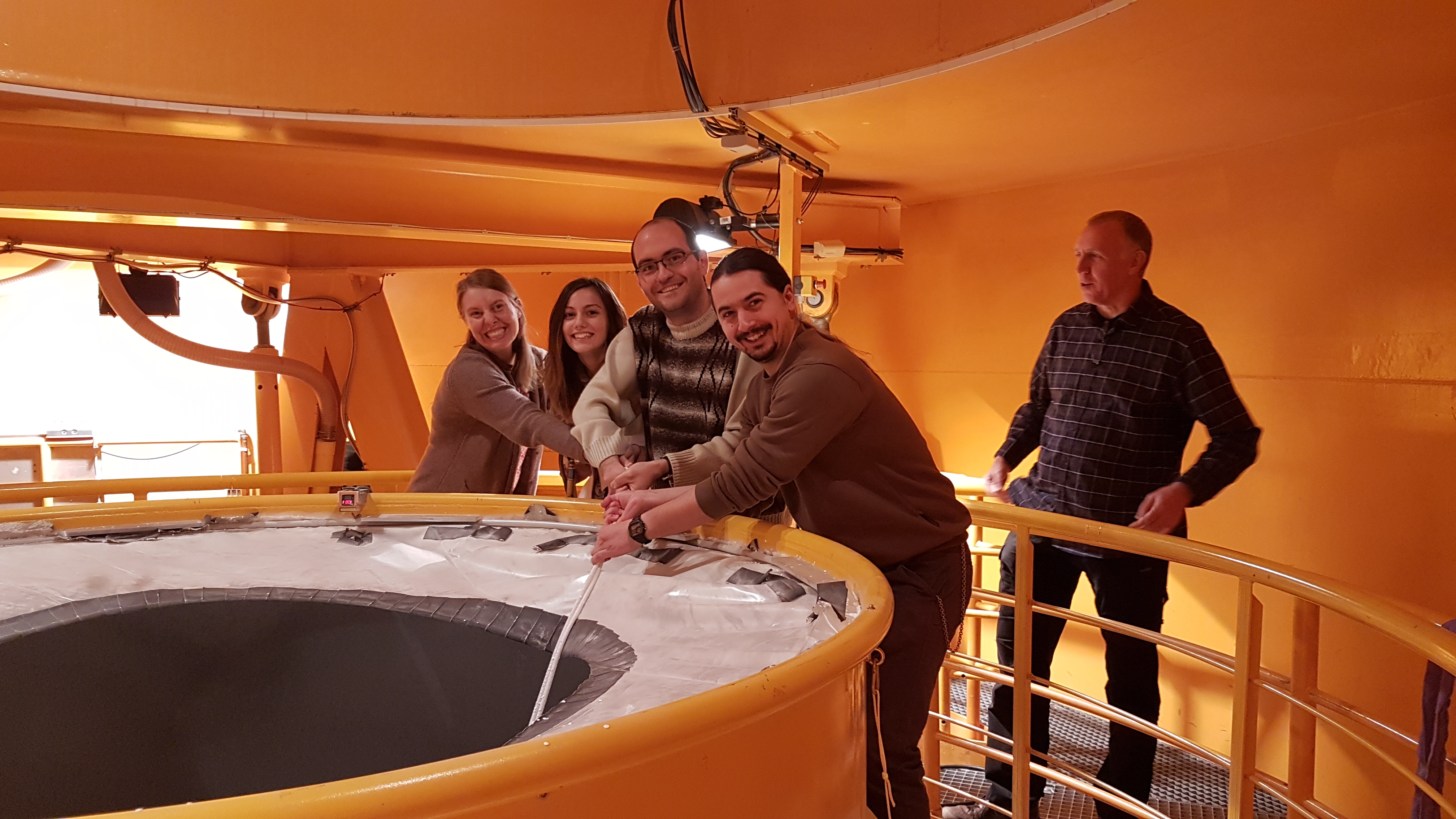 The team pulled out the experiment capsule from the deceleration unit of the drop tower!

Complete working team including Mr. Thorben Könemann the responsible DropTES coordinator at ZARM in charge with the project and Ms. Ayami Kojima, the UNOOSA officer responsible for the project.

You can read their report from  HERE!

Cristi: "Taking part in the DropTES program within the multidisciplinary team and collaborating with them in order to obtain the best results in our experiment that was carried out at Bremen Drop Tower in Germany was one of the greatest experiences that I had, both in my professional life and personal life. Firstly, I had the opportunity to work with my teammates, highly skilled professionals in different domains (physics, lasers, biology) and  together with them, we have successfully set up and finished our set of experiments in micro-gravity. Secondly, together with my teammates, we had the opportunity not only to see and watch the experiments that are being done at Bremen Drop Tower, but also to have a deep understanding of the engineering technology that resides in the tower and that can be considered it's "heart". Last but not least, we had the opportunity to work with engineers and researchers from abroad, thus opening our perspective regarding fundamental research."

Simona: "I'm very grateful for the opportunity to participate in the DropTES programme. For me, this experience was a lesson about how to work in a team and how to eat very fast because the droplets evaporated too quickly. After DropTES, I am sure that this experiment will be a part of my dissertation thesis, where I want to grow some bacteria species to analyze the antimicrobial effect of Chlorpromazine."